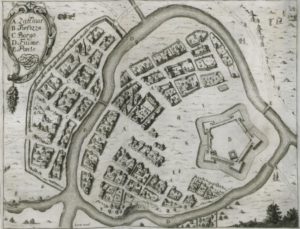 The concepts of border and frontier had a very long evolution in European history, from the Roman limes to the linear borders of modern states. A distinct phase in this long historical process is represented by the early modern period. Before the sixteenth century, territorial delimitations were vague, unstable and often conditioned by environment (rivers, mountains etc.). A popular interpretation in recent historiography is that medieval frontiers, and to a certain extent early modern frontiers, were fluid zones of interaction rather than boundaries. Well defined and established borders (partially due to the progress of cartography) were born at the beginning of the modern age. Of course this is a generalization which might suffer substantial modifications when confronted with particular cases.

The focus of our research activity will be the western frontier of Transylvania during the sixteenth and seventeenth centuries. From a chronological point of view our research will begin with the first decades of the sixteenth century when the medieval Kingdom of Hungary was dissolving under Ottoman pressure. During this period, marked by the battle of Mohács (1526) and the fall of Buda (1541), the Eastern territories of the Hungarian Crown were gradually developing into a new state, later known as the Transylvanian principality. While the Northern, Eastern and Southern borders, along the Carpathians, were rather well established and were not affected by spectacular changes during this period, the western parts of the principality were marked by an ongoing process of delimitation from the neighbouring powers, the Ottoman Empire and Royal Hungary under Habsburg rule. Frequent political changes and almost constant military conflicts determined a specific social and economic dynamic for this region, which have been partially ignored by previous research.

The geographic area under examination consists of several administrative units which were, for a longer or shorter period of time, under the jurisdiction of Transylvanian rulers: Severin, Cenad, Timiș, Torontal and Arad counties, which were almost entirely occupied by the Ottomans in 1552; the Banat of Lugoj and Caransebeș lost in 1658; Bihor county partially under Turkish occupation after the fall of Oradea fortress in 1660; Ugocsa, Satu Mare, Bereg, Szabolcs, Zemplén, Abaúj and Borsod counties which were under Transylvanian rule especially in the first half of the seventeenth century. After the Ottomans conquered Oradea in 1660, the Western frontier of the principality was reorganized on a second line of defence consisting of fortifications from: Maramureș, Inner Solnoc, Crasna, Cluj and Hunedoara counties. In the last decades of the seventeenth century, the main fortifications from this area were occupied by German garrisons and thus Transylvania lost its autonomy and became a part of the Habsburg monarchy.